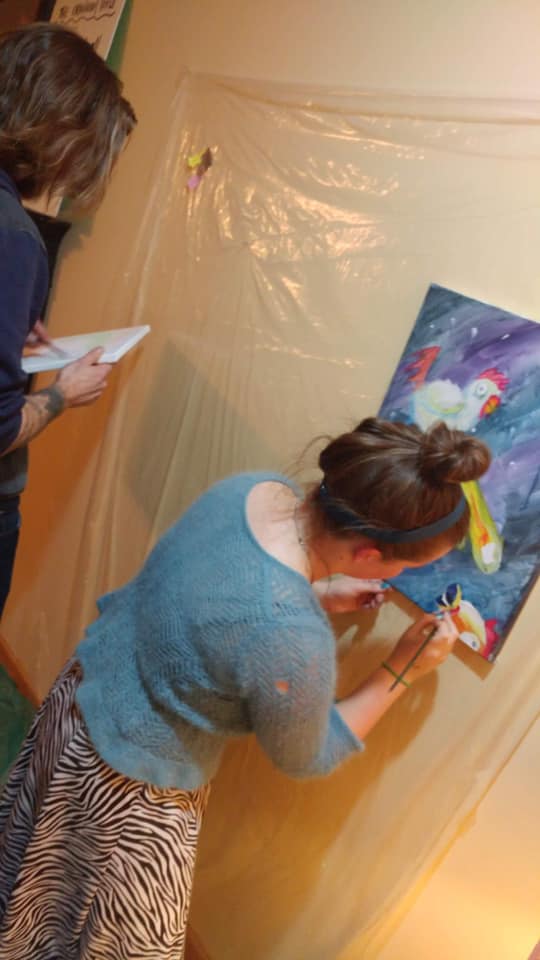 There’s this weird story we tell ourselves that somewhere around the age of 20, we need to “grow up” and “buckle down” and “get serious” and “put in that hustle” and “find that thing” that’s going to define our careers and our lives. Around this time in my life, although I was barely aware of what was happening, I divorced myself from a bunch of things that had come to define me: I stopped dancing, I stopped playing video games, I stopped making art, I stopped doing creative side projects with no real purpose to them (see: a strangely large collection of video scrapbooks, video games, comics, and parodies of short stories made with my friends). All of my time became absorbed by The One Thing that was going to define my life from now on, and that was biology.

I launched myself into an Honour’s degree in Animal Biology. I told myself the story that I had to be the best at this so that I could get a job in my competitive field, so that I could be a fully-realized adult, so that I could be successful, so that I could eventually do something BIG with my career that would leave an impact and give my life meaning. There was no way I was going to be able to be this impressive idealized career-driven Woman of the Future if I didn’t give everything to biology. It just seemed like a given: at some point you have to focus in on something, and to do that, you have to make space in your life for it. That should naturally push other things out. In the real world, people define themselves as one thing: a mechanical engineer, a freelance writer, a circus performer. I would be a biologist.

I never thought of this process as any kind of dramatic departure from my already-established identity. It was just the way of things, and I knew I could always have hobbies as long as they took up an inconsequential amount of time and were compartmentalized as “unprofessional activities.” I still did paintings from time to time, but I changed the way I thought about these paintings: they were irrelevant to the big picture. Creative projects that sprouted from nothing other than an idea and a will, such as the video games I used to make using an ancient bootleg version of Adobe Flash, were completely swept off the table. They didn’t really make the cut as being useful hobbies, because now that I was a busy adult, I would only have time for one or two hobbies that I could be good at. Much like how I funnelled all my working energy into The One Thing (biology), I funnelled all my extra energy into a small bouquet of hand-picked hobbies. I would hike (a “useful” hobby picked up from biology) and I would do art.

I think these self-imposed constraints came not only from the idea that I had to start seriously building my career, but also from a need to identify what made Sarah the Adult different from Sarah the Child. There was a sense that this metamorphosis from childhood to adulthood should include the shedding of some old skin (oh shit, mixing up my invertebrate and vertebrate metaphors).

But the thing I think I failed to understand is that people don’t change that much.

Just because I stopped playing video games doesn’t mean I stopped liking them; just because I stopped dancing doesn’t mean I stopped craving to dance. And after what has amounted to roughly a five-year hiatus from these things, they fit back into my life like familiar friends. These are the things that make me myself, and that all coalesce to create my unique perspective on whatever task I’m applying myself to at the moment. I never thought of these interests and hobbies as being components of my skill set, but in however nebulous a way, they are. And no one else out there is made of the exact same cocktail of preoccupations as I am. I mean, what a millenial thing to say, but everyone’s special.

The truth of the matter is that at a sufficiently competitive institution, the undergraduate lifestyle is a vortex that it’s really hard to escape from. For me it felt like a pretty easy choice to make: I was being judged for the most part based on the GPA I produced, so I had to do everything I could to maximize that. Honestly, I wouldn’t be where I am today if I hadn’t cast away a lot of things extraneous to my degree. Studying overtook all of that, and my single-minded focus on this one task is what made me “successful” and afforded me a lot of elite opportunities. But I undoubtedly temporarily lost a lot of myself along the way, because these parts of my personality were not considered (by myself or my institution) as skills.

But existing as a unidimensional persona is not a very appealing lifestyle, and it’s actually not a very appealing hire either. What I’m finding now is that hobbies can actually be the greatest assets, because they are your X factor. For example, I am currently enamoured by the idea of becoming a scientific illustrator/animator. I never set out to do that kind of career, but it feels more and more like the right fit for my particular skill set and interests because I’ve finally embraced my hobbies as a part of that whole. So I guess what I would say to any undergrads or unsure twentysomethings reading is this: don’t forget your hobbies, because they won’t forget you.